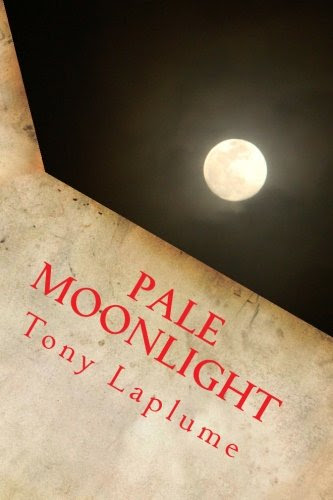 Announcing the release of Pale Moonlight, an epic vision of vampire literature.

This is the latest in my self-published works.  You can find the paperback version here and the Kindle version here.

This is the first book manuscript I deliberately wrote, after the thrice NaNoWRiMo experience that resulted in The Cloak of Shrouded Men.  I wrote it in the fall of 2009, with the idea of doing a fairly straightforward vampire novel, a sort of swashbuckling version that exists in the completed story in the form of the pirate Quincy, one of several supporting characters.  Instead of an action adventure, it became as most of my stories do an exploration of motivation.

I attempted for years to sell this book to traditional publishers, and never found any success.  I continued writing manuscripts, but it's the failure to find interest with it that led to all of the self-published efforts that make up the bulk of my releases.  I figured it was about time for the story to join that tradition.

Besides the silly notion of writing a version of the vampire story that I could never hope to complete with my particular writerly inclinations, Plato Finnegan's adventures in relation to his sister Fiona and the vampire Eolake in that particular aspect were based on my close bond with my beloved sister and her own successful efforts to emerge from a bad relationship.

Happily, the story also afforded me an avenue for a recurring character in some other projects, Oliver Row, who in Pale Moonlight is my version of Van Helsing, the one that would necessarily have to exist in this modern era of skepticism and TV drama which so often turns to this sort of material for inspiration.  One of the many minor characters who help round out the cast is Jason Clayton, my vision of an American Harry Potter, whose Dumbledore mentor is also an homage to a favorite high school teacher.

Pale Moonlight was originally entitled Finnegan, and that was what it was for the longest time, with at times various subtitles such as American Nightmares.  I had at one point retitled it Modern Ark, but recently - and for that reason finally decided to release it - on the present one, which not only evokes classic vampire imagery (not to mention the naming scheme for the Stephenie Meyer books) but a line from the Tim Burton Batman and a Star Trek: Deep Space Nine episode (bonus points if you can give me details on both, perhaps even a free copy!).

As with a lot of classic literature, it is most likely completely unfilmable, but if you want to try, I would be more than willing to help adapt it.

As I am a terrible CreateSpace formatter, the paperback features nothing that would be mistaken for a professional release.  I released it because I believe in the story.  There are bound to be the same typographical errors that plague all my releases (although since this also occurs in the ones released by persons other than myself, I don't feel quite as bad).

It is a book I hope may be enjoyed by everyone, but I know it won't.  If you are Pat Dilloway, for instance, Pale Moonlight will probably damn near infuriate you.

I am quite pleased to present it.
Posted by Tony Laplume at 11:41 PM