The strangest year yet at the box office thanks to the pandemic, obviously the results will always look weird, so let’s have a look, via Box Office Mojo as of today, for the top ten movies released during 2020:

Posted by Tony Laplume at 1:04 PM No comments:

Email ThisBlogThis!Share to TwitterShare to FacebookShare to Pinterest
Labels: movies

I guess I’m not even unofficially doing A to Z this year...

Across my network of blogs, some of which probably owe their existence to the challenge, I am apparently not doing the A to Z this year. This is possibly the first time since 2012 that this will be true. Which is kind of sad.

This wasn’t a deliberate choice. It just kind of happened. I did the challenge as an official participant many times, and unofficially (not linked into the sign-up) several times, too. I even did the challenge simultaneously on several blogs a few times. Once I got a novella out of it.

The challenge has been good to me. At the moment, I am committed to working on a new manuscript, which cancelled out an ambition to tackle another serialized story in official/unofficial participation.

Posted by Tony Laplume at 12:38 PM No comments:

A Journal of the Pandemic #24

A year ago today, I wrote about the pandemic for the first time.

A year ago, I was angry that a much-anticipated family reunion for my dad’s seventieth birthday had been cancelled. He turns seventy-one on Thursday, and there has been not one hint of a do-over, and in my conversation with him yesterday, he sounded disappointed that he will likely not receive even one visit, even from the son who lives forty minutes away.

And this is what’s wrong. This is what was stolen from us.

A year ago, and now here a year later, we’re inches closer to resuming ordinary life. Inches, because while the vaccines roll out and states reopen, we have still yet to grasp the full impact of the shutdowns. Not even close.

Single parents have struggled with the realities of distance learning. Students have lacked structure in their education. And while everyone has hammered everyone else about “not taking this seriously enough,” adherence to basic protocols has varied greatly. You hear endless condemnation for large gatherings (unless it’s a protest), and yet family gatherings have continued, domestic interstate travel, with little concern for quarantine measures.

Those of us following the rules have lost the most, and we don’t even care.

In some ways, the pandemic has been exceptionally good for me. I’ve been able to refocus on my writing in ways I haven’t been able to for years. That’s great! But it comes with a terrible cost. It’s been a year and three months since I’ve spent time, in-person, with my niece. I haven’t even met my new nephew. And this is extremely unlikely to change soon. I currently have no idea when it might.

The family reunion was cancelled. We set up a series of family phone calls, but somehow I started to feel only alienated because of them, and as they continued, I enjoyed them less, and by Christmas the very idea of them ruined the entire day. I have never had worse relations with my entire family than in the past year.

Oh, and the pandemic itself! A year later and I still don’t personally know a single person who died directly because of it. Everything I’ve experienced has been a result of side-effects.

Posted by Tony Laplume at 2:29 AM No comments:

Email ThisBlogThis!Share to TwitterShare to FacebookShare to Pinterest
Labels: A Journal of the Pandemic, COVID-19 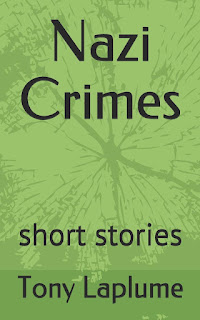 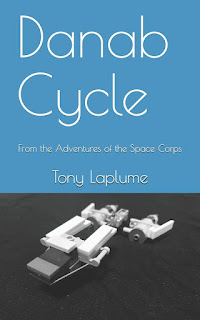 Nazi Crimes was released last November; have a look at the Amazon listing here.

Danab Cycle has just been released.  You can find the Amazon listing here.

Both are short story collections.  Nazi Crimes features material almost entirely written in 2020, in a variety of genres.  Danab Cycle features material written generally in the past decade, and is intended as a kind of overview of the Space Corps saga, covering a number of interesting angles that serve as excellent entry points.

Both are available only in paperback.

Posted by Tony Laplume at 11:15 AM No comments:

Last week I finished up editing Danab Cycle, a short story collection of Space Corps material. This is a result of the IWSG exit at the start of the year. I’ve amassed a good number of stories over the years from the saga, and this collection represents the material that hasn’t yet been published elsewhere. I’ll link and feature the cover later (as well as a formal announcement for last year’s Nazi Crimes, another collection), but I figured it was worth mentioning here ahead of time.

Editing the collection was interesting, as always, finding ways to improve as necessary, and really just revisiting, in some cases, work I hadn’t had a look at in years. Tonally there’s a good range. There’s one new story unseen anywhere else, based on what I used to consider a potential comic book (and even commissioned artwork for), which I expanded further in the editing process.

I’m all the more proud, as I have been anytime I’ve worked on a writing project recently, for making the time to do it. I don’t know, it seems in recent years my attitude has changed about what it looks like to spend time writing. I used to be fine taking long breaks between projects, but that was when I was tackling long projects routinely. When that period ended, I didn’t realize how far I drifted from it until I realized I wasn’t even tackling long projects anymore.

This ended up on my mind, naturally, since my next project is of course a long project, the second Danab Cycle/Space Corps book-length manuscript, Collider, the outline for which I am finally 100% satisfied has reached workable condition. So I will certainly keep you posted on how that develops. And hopefully I start writing it soon, too...

Posted by Tony Laplume at 3:32 PM No comments:

I apologize for the inconvenience, but for the foreseeable future, comments will be disabled on this and my other blogs, as a longtime internet acquaintance is currently experiencing a digital stroke, and hopefully this will help convince him once and for all that he can move on. It’s only been nearly a decade of pointless dithering. And only a few weeks of the stroke. So I anticipate bringing comments back...next millennium? Does that sound good to you? Most of the people visiting me I visit anyway, so I will try to keep up correspondence better that way.
Thank you for your time.
Posted by Tony Laplume at 11:37 AM No comments:

A Journal of the Pandemic #23

Well, I don’t know about you, but at this point it’s no longer a question: There are people who talk about COVID-19 numbers being purposely inflated, but at my workplace there has been a consistent, concerted effort to downplay infections.
Is this common? For everything that’s been said about the pandemic, I personally have seen very little chatter about what it’s like to actually experience it. There has certainly been plenty of talk about the effects on the job market, schooling, sports, but not much on what people have experienced in their everyday lives. Maybe glimpses into isolation, but, well, I don’t know. That’s a large part of why I’ve been writing this series. I wanted to document my thoughts along the way. This is as significant a moment in history as I have yet lived through, something that has extended to very close to a year at this point, and of course whatever the effects of vaccine rollout, will linger for probably much of 2021 at least.
The stimulus money, for me, has been a bonus. The second installment I decided to use in part to read comics, DC’s Future State slate, which is a repurposing of what was originally intended to be another line-wide revamp, akin to the Silver Age, a new generation of heroes inhabiting familiar roles. So far I’ve really enjoyed it. One month down, one to go. I’ve been ordering them from Midtown. I panicked this past week because I ran into a roadblock for a release for the first time. I thought speculators had spoiled the second issue of a Teen Titans story featuring the in-continuity debut of Red X, a character previously featured in the cartoons. But then it became available soon enough, and I made Midtown even happier by ordering even more...
I joined the first decade of the new millennium a few weeks back by actually getting a Blu-ray player.  By the end of this decade I might even have a Netflix account!
My sister just retired from the Air Force after twenty years. The pandemic prevented me from even considering attending the ceremony (which I had been looking forward to ever since my brother-in-law’s). Well. She’s a full-time mom now, about six months into the life of her son (the Burrito’s baby brother). I sent her a card in which I tried to express how proud I am of everything she accomplished in her career.
The Super Bowl is in town! I’m not attending, and won’t really explore the attractions, but obviously this is not a normal Super Bowl and as such the economic and visitor rush is not going to happen, and really, the small sampling of neighborhoods I took this morning does not reveal an abundance of excitement (maybe elsewhere in town the Gasparilla faithful decked themselves out for this, too). At work there were a lot of jerseys. I made a deal with a coworker I can’t possibly lose concerning the outcome (because win or lose Tom Brady already makes further history just by being in the game).
But it’s been nice to hear about all the healthcare workers getting tickets. Actual tickets were priced to highly discourage attendance, although there will be some of that, and another coworker will be moonlighting, so I will know someone there. As they say round here, “Raise the flag.”
I actually have been writing recently. This year will be a little interesting in at least one regard: I’ve got a project where I will write a new chapter once a month. Thankfully, before last month was over I even figured out how to write the thing. And of course Danab Cycle business, in a variety of ways, including a short story collection. I did a lot of small projects last year. This year the goal is larger scope. One being the first full-length manuscript in about seven years. My work schedule is (probably) changing in a few weeks. It might mean less reading. But if so, then more writing. Or maybe balancing both.
We’ll see!
Posted by Tony Laplume at 11:28 AM 8 comments: