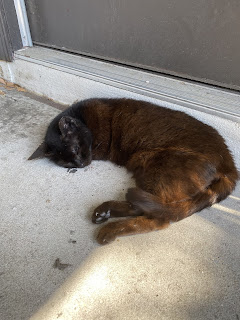 This is Sally. Sally is a stray cat. Sally might have another name. As far as I’m concerned she’s Sally.

I’ve known Sally pretty much since I moved to my new apartment two years ago. She’s one of several strays who were around at the time, and the only one I can be certain is still around now. She’s hung out at my stoop periodically, originally because the people who lived next door had a cat bed out for her.

I’ve since learned more about her. I’ve learned she’s very slow to trust. That she even came round when I first moved in now seems remarkable. At the moment she’s again keeping her distance because I have another new neighbor, and they’ve begun putting things outside their door, and she’s evaluating.

She only recently returned to my stoop. You see, there was a dog. Not my dog. The neighbor from before this one. I perhaps contaminated myself by petting the dog, quite enthusiastically. It was a very good dog, and deserved the attention.

Sally is a finicky eater. It took time to learn exactly what she liked. I only just nailed, it, too, and stocked up. And then the new neighbors had to unsettle things again.

Sally is not to be petted. No, not at all! She values her personal space. But she’ll follow me up the stairs, knowing I’ll have something for her. She’ll look into my apartment, mewl her thanks. And she’ll get on with it, and sometimes just hang out.

She’s got another human friend. As far as I know, they’ve never contaminated themselves, with dog or otherwise. They put food out reliably. She eats it. She comes round when it’s safe, here, all the same. Never pin yourself to a single source!

Email ThisBlogThis!Share to TwitterShare to FacebookShare to Pinterest
Labels: Sally